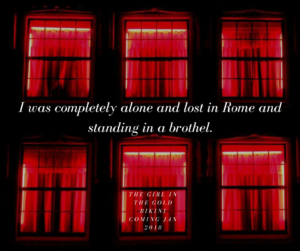 When I first stepped off the train from the airport and into the vast foreignness of Rome’s Termini Station, I had no inkling of the impact this adventure would have on my life. It wasn’t my first time travelling to Italy, but it was my first solo adventure. I was heading to the University of Siena to study the Italian language for the summer. I would be earning credit toward my university degree, and living in the university dorm with a randomly selected roommate: a girl named Brenda who was taking Italian history.

I was grateful to the woman from Sicily whom I met on the plane, who connected me with a gentleman from Rome who agreed to help me find my hotel in the ancient city. He guided me through the busy Termini Station, which really is like it appears in the movies — busy, steamy, stinky and clearly not in Canada. The musical Italian language bounced off the glass canopies over the trains. People were sitting at little bistro tables roped off in what appeared to be random areas of the station. The whole station had an atmosphere of organized chaos. I had never seen anything like it. Cigarette smoke mingled with the steam coming from the trains. Rows of trains as far as I could see, like I was looking into an image mirrored into mirrors forever. I was so overwhelmed by the language and life around me that I didn’t even notice when the atrium seamlessly transitioned from indoors to outdoors. I passed shops. I smelled pastries and coffee. Then I smelled exhaust and the slightly sickly smell of sewage. I stopped to absorb where I was, but the gentleman who was taking me to my hotel gestured for me to hurry up.

I spoke almost no Italian, apart from the perfunctory phrases I knew from my textbook. Quanto costa? Non c’e male. Buongiorno. Dove vai? Grazie. How much? Not bad. Hello. Where are you going? Thank you. Not exactly conversation starters.

I blindly followed the man, and I was starting to get a bit anxious. It was getting late, I’d been travelling for 12 hours, I had no idea where I was going, my luggage was heavy, I was exhausted and starting to feel the emotional strain of being alone. The area around Termini Station is dirty and litter-filled, the walls of the buildings stained with the black soot of city life, and the June humidity was starting to stick to me. We walked so fast, I couldn’t even absorb the fact that I was in Rome. Rome! The man stopped suddenly, pointed into an alcove and motioned for me to go up the stairs that disappeared just inside the entrance. Then he was gone.

I stepped out from the alcove, looking for a sign on the front of the two-storey building. Seeing no indication that this was a hotel, I stood on the sidewalk, not sure what to do. I looked around for some help, hoping for a police officer or a friendly looking woman, but the street was almost abandoned. It didn’t really matter since I was afraid to ask a stranger — who spoke a language I didn’t understand, and who may take advantage of a young tourist who was completely alone — for help. I went back into the alcove, noticing the garbage on the floor and on the stairs. This was not how I pictured Italy. Where were the cafés with the old men sitting outside sipping cappuccino? I did not see any glamourous women, wearing the latest fashion, turning heads with every step. I saw the ruins of Rome, but not the kind you book a tour to see. To my right, there was an elevator cage that I had no idea how to operate. I opened the gate, the metal screeching. It smelled like urine and I couldn’t pull the gate closed. I had no choice but to walk up the trash-strewn stairs, dragging my wheel-less luggage behind me. I rested on the landing before the turn, before climbing the last flight.

There was only one door in front of me. It didn’t look like the entrance to any hotel I was used to. The clear glass door gave me a full view down the corridor on the other side — a long hallway with curtains covering eight doorways, four on either side. Was this for real? Despite the jet lag, I put the pieces together. I couldn’t fucking believe what I was seeing. I didn’t speak Italian, I didn’t have a map, I didn’t know where to go. All I knew for sure was that the man from the plane had dropped me off at a brothel. 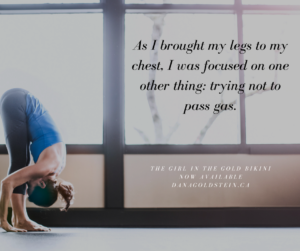 I am not a yoga fan. I know there are people who absolutely love yoga, and I am fully aware of the benefits, but there are some things about yoga that people don’t tell you — just like there are some ugly bits about pregnancy and childbirth that you only find out about through experience.

I once decided to try a beginner class requiring extremely basic skills. The class focused on breathing and stretching the muscles, so I wasn’t expected to put my ankle behind my head in this session. Good thing, because there is little chance I could get my thigh over my head without knocking myself out. We started with breathing into the stomach. No problem. Then we worked on breathing into the sternum and the chest. I hadn’t seen my ribs in four years and after two kids my chest had sort of worked itself downward into that region. I thought I was breathing into the sternum, but then I felt my boobs hit my chin, and things became confused.

The legs and butt were next. Various stretches and bends and twists. I am pretty flexible, so that wasn’t an issue. What happened was my thighs got in the way. It may not have looked like it, but my butt was on the floor and my legs were up in the air. It was just tough to tell where they separated. But believe me, my lower back knew the difference, because it was starting to hurt. I messed things up by shifting my weight. My legs, so used to taking the brunt of my bulk, were now laughing their … well … ass off, because they were happily in the air enjoying a break while my back was groaning. And I completely lost all focus on my breathing. Why?

Because as I brought my legs to my chest, I was focused on one other thing: trying not to pass gas. Still, I kept trying the stretches, while trying not to let one go.

I looked around at my friends, to see if they were suffering the same way, and yes, they absolutely were. Then it happened. Someone in the class let one go. For the next 30 minutes, my friends and I tried desperately not to look at each other, because when we did, we released into uncontrollable giggles. When the instructor started grunting and moaning like she was in a porn movie, I had to leave the room and let the hysterics take over. I lost control of my breathing while trying not to lose control of my bladder. When I settled down enough to think I could manage to finish the class, one of my friends emerged. One glance and we were both holding our sides, wiping our tears and had to move into the hallway far from the class so we didn’t disturb the fire-breathing meditation happening. It was ridiculous.

Yeah, yoga is not for me.